Sort of a slow week in Writing. They happen from time to time. I finished up a couple of things but I really didn't work as hard as I could have. Maybe its a sense of ennui, maybe I just needed to recharge a little.

Finished the rewrite of Familiar Stranger. Want to go over the book one more time from a high level to make sure the chapter names all lineup and there are no weird spaces or blank pages before I send to my editor. Hopefully, I'll get that done tonight or soon after and we can move Familiar Stranger on to its next stage in life. I'm still not sure what the next project along these lines will be. I have several books that are in need of another polish but I'm not sure if I don't want to move onto something new with the same main characters. You'll know as soon as I figure it out.

In addition to finishing that work, I completed and posted about 3000 words on Hell's Angels (1930); Trophy Unlocked's Saturday Morning Review. The film is a World War I melodrama directed by Howard Hughes with James Whale and Edmund Goulding assisting but getting no screen credit. The film is most notable for being Jean Harlow's first starring role and while the film lost money at the box office she would go on to become a star at MGM. We have featured her in several reviews on the blog. 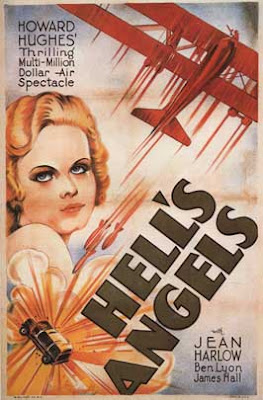 I'm going to start on a review this week for Cry Danger (1951), which I hope to finish in time for Saturday.

On the Powers Squared front, this was also a rather slow week. Our artist sent us pencils of the next four issues on Saturday night, which Paul and I reviewed on Sunday afternoon. Only a couple of notes for her. With our colorist caught up, there aren't any pages to send her until next month. Our letterer also worked on some pages, which is a good sign.

With artwork being done for Issue 7, Paul and I sat down to map out the next story arcs for the comic book. We figured out the stories and their order as well as talked about Powers Squared beyond the next three storylines. I hope we're not planning ahead in vain as I would really like to see this become sustainable in the very near future. I won't go into details here, except to say there will be some rewrites in our future as we try to stay ahead of our artist. I'm excited and a little scared. Still posting on Instagram and Twitter, are you following? (Spoiler: Probably not but would really appreciate it if you would. It's easy and it's free!)

On the video front, I hadn't looked at them. I think I'm a little afraid actually; fearful that I won't come across as well as I need to. Right now they're the Schroedinger's Cat, so I'm both bad and really good. Hate to burst that bubble, but I will have to. Time is running out and we need to get beyond this, I mean I need to.

I wanted to participate this week in a local comic creator gathering, Koffee and Komics, but I didn't. I've been a member for over a year now but Thursday nights are sort of hard to pull off for me, even though it's only once a month. My intention was to go this week but we ended up being a car short so I had to come home early from work so one of my sons could use my car to go to class. Sorry about not attending.

Well, that's about it for me, confessions and all. So for sure next week, watching videos and working on rewrites. It's nice to have plans.
Posted by lionsroar at 8:08 PM