So a couple of things to get to right away. First, last week, we sat down to record some videos to put up on YouTube about Powers Squared. We spent a couple of hours on Sunday, at Galaxy of Comics and came away with several minutes of footage. While the conversation is good, there are some technical issues, such as its very dark and I'm sort of out of focus as a result. We can argue back and forth if I'm better looking blurry or not, but I think if I'm the subject of the shot, I should be in focus.

And, I did finish just last night with my edits on Familiar Stranger, which means the next week or so, I'll be going through the manuscript and making those changes. I'm pretty happy with the process. It's sort of like reading some of it for the first time since some writing/rewriting is months old by now. But it feels good to be on this side and feel like I'm getting ready to close out this book, at least for now. I'm not sure if I should rewrite another old book, the one that started me on this series, Simple Sins, or go onto something new. I'm sort of torn. If anyone has any ideas, please leave a comment. (Those are welcomed by the way.)

Trying to be diligent about making uploads to Instagram, it would be awesome if you followed the account for Powers Squared. I'm sort of churning through characters at the moment but would like to spice it up with some photos from the video shoot and possibly with thumbnails for Issues 6 and 7. Its sort of awkward to be trying to promote old and new but that's sort of where we are with Powers Squared.

I did post a couple of photos last weekend, however, the one I'm in I'm very much chopped off. It's all about layout and positioning, a lesson I'm only learning after the fact. I was also surprised that the photos I took ended up backward, so I had to upload them to my computer, reverse them, loaded them back to my phone and then upload them to Instagram. Sort of takes the Insta-part away. If you follow us, you'll get to see all of these great missteps as we go along, so a splendid time is guaranteed for all. (Next week, *Spoiler Alert* we'll push Twitter @MartyandEli.)

On the creative side of Powers Squared, we've received and reviewed thumbnails for the first eight pages of Issue #7. Our artist sends us two sets and we go through each and select the panels we like from each. She then sent us the combined version. There were a few more adjustments we asked for but she's moving on now to pencils.

Our colorist finished her work on the cover for Issue #6 and is working on the last four pages of that issue. 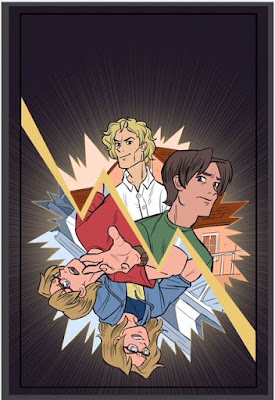 Trophy Unlocked's Saturday Morning Review was a look at the video game The Silver Case for PS4. Once again, written by another writer for the blog. I am, however, finally getting back into writing them. On Friday night, we watched Clueless (1995), a film recommended by one of Paul's teachers at the UCLA Extension program for Writers, which he is currently in. The academic-side is about the inciting incident in the story, while the review will take more of a holistic approach. I've written about 600 + words so far but will be something else I can work on this week.

And, as every week, I'll be back here to discuss everything that has happened to me relating to my writing. Hope you'll be back to take a look.
Posted by lionsroar at 9:14 PM