Next weekend, Paul and I are attending the Writer's Digest Novel Writing Conference in Pasadena. It will be our second time to attend. In the spirit of the event, I'll start with my current rewrite work on fka A Killer Blog.

I had two versions of the story that I was trying to wed together and it was the main focus of my writing this past week. Putting together two similar but slightly different tellings of the same events proved to be much harder than I had expected and somewhat frustrating. If I had more than one version of the novel open, I would find myself editing the wrong version. I took a different approach and at least, by the end of Saturday, had combined the two versions and made the edits I had wanted to make, though sometimes the lines I wanted to edit were not in the combined version. 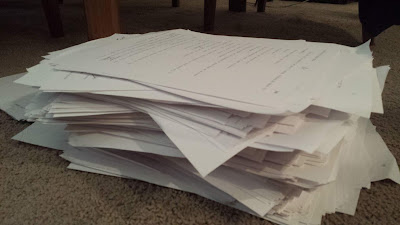 There is still a lot of work to be done. As an example, when searching for a phrase, I found it used twice within about 50 pages of each other, showing the differences between two. While I feel I think better at a computer, I know I edit better with paper and pencil, so it looks like I'll be printing through another ream of paper to finish the editing. Hopefully, by the,n I'll come up with a better title.

And hopefully, by then, I'll hear from the editor on Familiar Stranger, but as of now its still radio silence from him. I  tried to change that and called this week but I got voicemail instead. Today, with people only having cell phones, I have to wonder if he saw it was my number and did not answer. Ouch! I'll have to keep trying but some of it comes down to him as well. Communication is a two-way street.  Not sure why there has been no response. Very curious to say the least, frustrating as hell but curious nonetheless.

The silence we had been getting from our contact at comiXology finally broke and in a rather disappointing fashion. While he has blown hot and cold since we've been dealing with them, he pretty much turned on the cold air for good. I had asked if he could look at the next two issues of Powers Squared but in so many words he told us to leave him alone. Not what you really want to hear from anyone, especially your "publisher".

I haven't done a study but anecdotally, I get the feeling that indies, like us, don't usually get much support from the online publisher. While they had done some press for the release of Issues 3 through 5 that was more to make up for not doing anything when the first two issues were published. That goodwill is now apparently gone, used up.

comiXology is not really in the business to grow new IPs but rather to make monies on existing ones or new ones that come from the major publishers: Marvel, DC, Image and the like. Like YouTube, they welcome all comers but the little guys aren't primary to their success.

On the flip side, San Diego Comic-Con recognized Paul, Trevor and I as Professionals. While that doesn't really matter to readers, it was still nice to receive. So, there is hope.

As far as the comic book goes, we have received the first four pages of Issue 9 as pencils. Rachel sent us the pages earlier in the week and we gave her some feedback. New versions followed but that is about it as far as what we've received. Surprisingly, October has been a slow month. For the first time, I'd say I was concerned we're not going to have 8 new pages this month. No pages so far from Nina either, traveling and family but there is still time I guess before the end of the month.  Trevor has lettered more pages on Issue 8 but other than that, not much more to report on production wise.

Paul and I have continued our weekly vlog on our YouTube channel and we've continued with our weekly poll on the website. Last week's poll question was "If you had to choose one: Telepathy vs. Teleportation?" with teleportation winning four to none; that's right four. This week's poll question "If you had to choose one: Super Sight or Super Speed?" only has to votes with Super Sight winning two to none. So far the numbers for both are low and while it's easy to want to give up, hope and desire keep us going.

The rewrites on fka A Killer Blog has taken away from time on reviews for Trophy Unlocked. I did do some more work on the review for While The City Sleeps but not really enough. I also need to work on a new review for Follow Me Quietly, the film noir we watched on Friday night.

Our horror look for Spooktober did continue with Get Out (2017), which was our Saturday Morning Review. Even though the film is very recent, I gave it a more in-depth look since I figure it will be talked about for a while.

So, next week, rewrites, reviews and seminars. I'll be sure to share here what I learn next weekend as well.
Posted by lionsroar at 6:44 PM