It seemed like every time I turned around this week there was something going on with Powers Squared. Not that it was always underfoot, but there always seemed to be something that needed to or should be done.

We made two unboxing videos this week, the first one when we received new issues from Artithmeric (Kirby Good and Evil, Issues 7 and 8), and a second one when we received our Merch (T-shirts) the next night. Since we didn't want to turn into an unboxing video channel, despite our first such video being our biggest one yet, we delayed the second one until Sunday morning. Perhaps it would be more accurate to say it got delayed until Sunday morning.

Thursday I posted a preview image for this week's thumbnail on Instagram just because I want us to be active. Friday I post a poll question on our website. For the first time in 26 weeks, I posted a question a second time. While I'd like to say it was on purpose, I have to admit it was a mistake. I posted the same question that I had on week #13. Back then it got a whopping one vote and as it turns out that choice is not on this week's question. Again, another accident but I decided that I would post the same question in 13weeks. Let's see if anyone notices.

On Friday, we received inks from Rachel for pages 17-20 and the cover for Issue #10 as well as pages from Nina, 5-8 of the same issue. And finally, on Saturday night, pages 1-4 lettered by Trevor. He had been having some issues with WeTransfer which is how we send and receive pages to be lettered with him. I think that's a leftover from the first issues and when we used WeTransfer to communicate with the artist and colorists.

With Nina, we use Dropbox, which this week got to be full, so I had to offload the files prior to issue #9. I've already sort of saved them on my own computer as part of the workflow but I saved those files to a flash drive, you know, just in case. I'll admit that  I do a lot of backing up with this as well as all my writing. I like having a copy with me of everything just in case something comes up while I'm away from my computer. 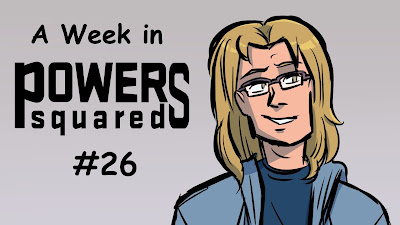 Paul and I shot our weekly vlog on Sunday afternoon and posted it on our YouTube channel. After which we shot a little promo video for Instagram. Now, I just tuned into this, after what 26 weeks, but I've been sort of double posting about our weekly videos. First through YouTube hitting sites like our Facebook page, Twitter and Tumblr, which are the same platforms I can access through Instagram. So I decided to type in the web address into the description of the Instagram video and then I can skip doing the individual shares from YouTube. The goal is always to spend as little time as you have to on social media, isn't it? (I'm probably passing on the obvious.) 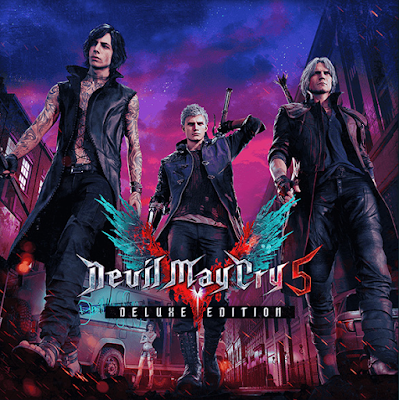 For Trophy Unlocked, I finished my review of Sky Captain and The World of Tomorrow, which I should publish next week. This week's Saturday Morning Review was Paul's take on Devil May Cry 5. Planning ahead, Trevor wrote a review of Shazam!, which we saw as part of an early screening through Fandango. We're going to save it back until the week of the film's release, so please look for it then.

As far as Broken People, I did send off two more query letters this past Thursday, mostly so I didn't have to write here that I had not sent any again. So for those playing at home, it's three queries out and no rejections (at least so far). Sadly, didn't really have time for much more this week. Sometimes this gets pushed to the back burner though I never want it to go out.

Hopefully, this next week, I'll get a chance to do more with this part of my writing. I'm going to contact the editor on Familiar Stranger. I know I sound like the little engine that could but I will, I promise you. Will I get a response? Well, that will be up to him.
Posted by lionsroar at 7:38 PM