This was another week of writing where it was once again dominated by Powers Squared. A lot of time was spent not on writing but on creating uploadable files for various outlets. Each platform has its own limitations and requirements so I spent a good deal of time making files or renaming existing ones.

While we now have a print-on-demand version, through Artithmeric.com, we've been trying to branch out to more outlets as well, including other digital platforms and perhaps other print-on-demand websites. I've been renaming files and making multiple .pdfs for one issue as required by another digital platform. I regret that I haven't yet uploaded files to that new site.

Earlier this week, I was surprised when I opened the Powers Squared twitter account @Martyand Eli, and saw images of a printed version of our comic book and the following comments: 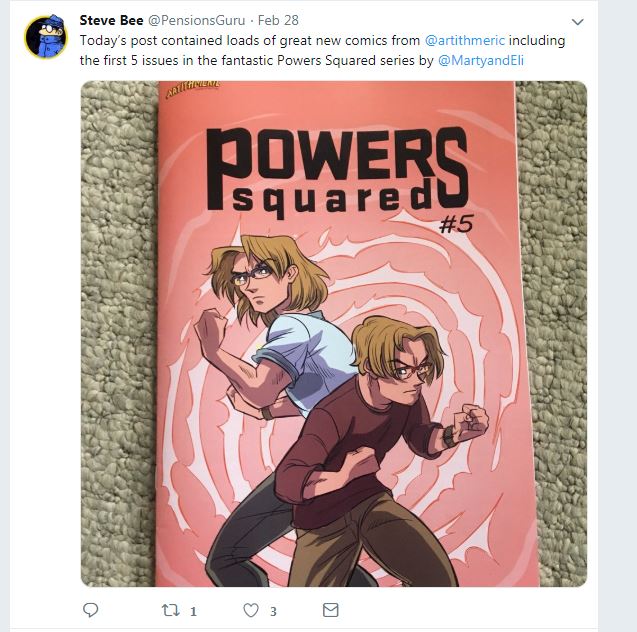 Super cool. And I was a little jealous since I'm still waiting for my issues to arrive. 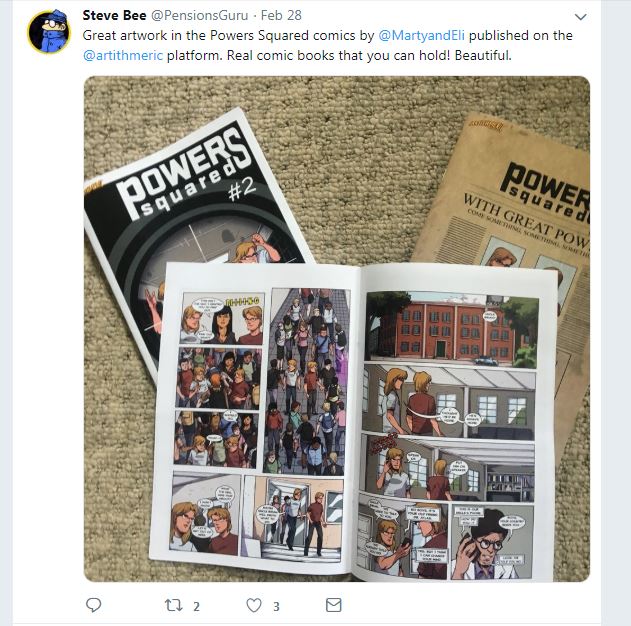 It was really cool to see such a great reaction from anyone.

That same day, I received notification that our new issues were going to drop on comixology.com on March 6th. It seems like forever since these issues were finished but I always want to have some in reserve. We also decided to make them available day and date on Artithmeric, so we've uploaded the files (more uploading), but it will be really cool to see them. I still have to order them myself.

I'm exploring another print-on-demand site as well, looking for a possible tier gift for our Kickstarter. I said I wanted to do it in February but that's now gone by the wayside. I want this to work so I'm trying to make sure we have good gifts if we fund. Printed versions would make a good alternative to a digital-only release.

I notified First Comic News about the date on Thursday and on Saturday, their reviewer published his reviews. I can't say that I wasn't a little disappointed at his 3 out of 5 ratings for both and no mention of the new look, but there is nothing wrong with getting some advance publicity. Sometimes, you have to move on. I'm more interested in getting the publicity than the exact review I'd like.

With the new reviews, I had to make more updates to the website to accommodate them, which is more time spent on things other than writing. All necessary but all time is precious and fleeting. I do that and I'm not writing.

On Friday, Rachel sent us thumbnails for the last four pages of Issue #10, as well as possible covers. Paul and I didn't sit down until Saturday, but we managed to go through them and give her our feedback. For the most part, we picked one set for each page, though we did have some exchanges and comments on Panel 5 on three of the pages, which is more of a coincidence than anything else.

Nina is busy prepping for her first Artist Alley appearance at The Atlanta Sci-fi and Fantasy Expo next weekend, so the coloring can wait for a week or so. If you're at the Expo, please drop by and support her.

In other writing, I did finish my review of Bohemian Rhapsody but that was not Trophy Unlocked's Saturday Morning Review. That belonged to Paul's review of Kingdom Hearts III, which is a game he's been waiting for 13 years to play. Patience finally paid off so it was fitting he got to review it and that it would the 925th on the blog he started.

I did manage to squeeze in a little more work on The Runaway but that was fleeting and on only one day.

As promised, I did reach out to the "editor" on Familiar Stranger. I'm assuming he's still alive but, as per the usual, no reply to my email. I can't help to feel a little insulted and very disappointed in his lack of response. We are coming up on a year since I sent him the manuscript. I don't know what possibly could be delaying any response from him. How hard is it to return an email? Well, if he's been any indication, very hard indeed.

Well, that's this week. I imagine next week will also be a lot about Powers Squared, so stay tuned. Would really appreciate it if you could take a look at the new issues and even tell your friends. If one of them is my editor, tell him all will be forgiven if he just writes back.
Posted by lionsroar at 9:36 PM