Why is it the first week of Daylight Saving Time always kicks me in the ass? I have enough sleeping as it is but for some reason, it's always worse the first week in whenever the time changes; spring forward or fall back, it's always the same. Just a little precursor to explain why this wasn't my most productive week.

I had in mind to write a bit of a rant about having to wait but I've calmed down a bit since Friday. I don't know about you but I'm not getting any younger and so it bugs me when people always make you wait to get a response, sometimes months. And I'm not talking about agents, that's bad enough but all the well-wishers, advisors and editors who don't make an effort to communicate back, even though they say they will. I'm sometimes sorry that I don't point people out by name on this blog but I know the momentary delight I would have in naming people would also probably mean that we're no longer "working" together so I don't. I will say good things about people but I don't want to be calling people out by name when I'm angry/disappointed. Chances are they don't read this blog or its excerpts which I put out on various social media sites but why take the chance? This might be the week they read it and there would be a bridge burned in my wake. But I'm really getting tired of waiting on people. As I said, Death inspires me like a dog inspires a rabbit to quote Twenty-one Pilots, why doesn't it inspire you, too? I want to get as much done as I can and waiting for feedback is not how I want to spend my time. (Trust me, this is way calmer than what was going through my fevered brow on Friday afternoon.)

Now that I got that off my chest, I can talk about what happened this past week.

Rachel sent us pencils for the last four pages of Issue #10 as well as the cover, all of which look good. I still find it exciting to see the story come alive through her drawings. In some cases, it has been a while since I've seen the script so seeing it drawn out makes me like it all over again. And there is quite a difference between the thumbnails and pencils. Things we liked really come into focus and it is only when we see the pencils does it start to look like a comic book.

No word from our colorist so far this month. Nina just attended her first convention as an artist and it seems to have gone pretty well for her. Did receive an invoice today, which means pages are forthcoming.

Added another shirt to our merch at artithmeric.com. Sorry, I have to mention such mundane things, but I do want to make money from the venture. It is, after all, the desire to make it self-sustaining. 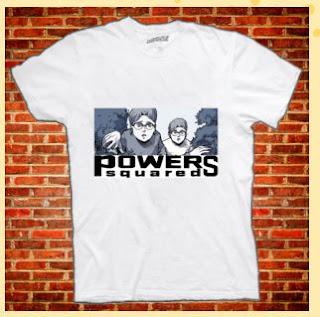 Still kicking around ideas for the Kickstarter. Trying to come up with a printed option that we can afford. Spent one night this week making the pages smaller to fit in with the publisher's template. Kind of a pain and I still have more to do to get them ready. After #10, I'd like to get back to a more standard page layout to save me from having to keep doing this. 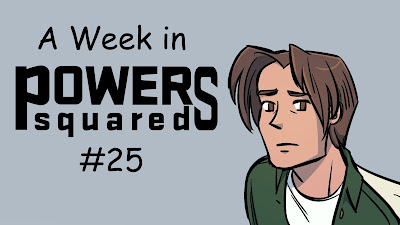 Paul and I uploaded our 25th vlog A Week in Powers Squared, which you can watch here.

Thursday was Pi day = pie day, so we had to go out to get pizza. That, of course, means less got done than usual but sometimes you have to put family first. Am I right? On Saturday, we went to see Wonder Park, which Trevor has reviewed, but we also decided to get new phones, since ours are about 6 generations old and our then-current carrier didn't want to do anything to help us. Well, that turned into three hours to get everything moved over, except I had to spend time at home transferring my own files and I really don't want to get into the frustration all over again, but suffice to say that pretty much killed another day.

Talking with my co-creators about doing a pitch packet for Powers Squared, you know to make it into an animated TV series. We own the property and we've worked about a fair number of stories and I think it would be a good series. Besides, what's the harm in trying? We had attended a session about Pitch Packets at GZAExpo or through them. Not sure what sort of time commitment we're talking about, but it would seem like the next step in some ways.

As far as other writings go, I've thought about The Runaway but haven't had a chance to work on it or anything else related to J.D. Barrister, including sending more query letters, which I know I need to do and harassing the editor on Familiar Stranger (see above rant). This week for sure, and I've probably been saying that for weeks now.

For Trophy Unlocked, I finished a rather lengthy review of Gone With the Wind (1939) which was this past Saturday Morning's review. Hadn't seen the film in years and didn't want to miss out on the opportunity. Trevor also published a review of Wonder Park. Wanted to start working on one for Sky Captain and the World of Tomorrow, which we watched last Friday night, but my computer was out of juice.

That was the kind of week in writing it was for me, out of juice.
Posted by lionsroar at 8:46 PM