Well, the big push this week and the subject of most of this Report From the Front is San Diego Comic Con 2018. 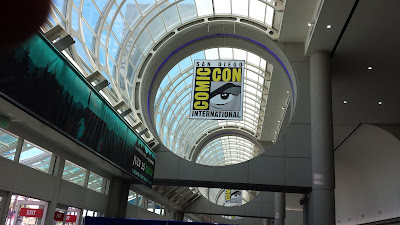 The report is about my experience at Comic-Con and not a wrap up of the celebrity sightings or the parties. I'm not a big photographer of Cosplayers, either. Even though there may be some really interesting and provocative characters running around on the floor, I'm too consistently worried about my phone battery running down to spend too much time documenting.

I did personally see a couple of strange sights that I can relate. Both Funimation and Viz had problems in their booths, though I think Funimation's was caused by over-anxious fans and Viz brought it on themselves. For Funimation. it was the Funko exclusives for Dragon Ball Z that they were selling. Apparently, there were three incidents on Preview night, before I got to the floor, that caused them to be shut down for a couple of days. In one, a man and his child were knocked to the ground.

On Saturday morning, Viz had My Hero Academia's creator, Kohei Horikoshi, in for a signing. However, the booth didn't handle the ticket distribution very well. You had to show up first thing on Saturday to get one for that day's signing. However, they refused to tell anyone where this distribution was going to happen so by 9:30, the allotted time, there were hundreds of people in the booth and spilling out onto the floor, blocking one of the walkways.

In order to disperse the crowd, a Viz spokesperson said that the San Diego Fire Marshall was threatening to shut down Comic-Con if they didn't leave the booth. Not sure how true that was, but it could easily have been a PR nightmare for Viz. I don't think anyone would want to be known as the company that closed down the Con.

I'm always tired at Comic-Con and it started the first day we were here, even before the day started. The night before as I was trying to add some spreadsheets to my new Chromebook, which I was taking with me, the damned thing kicked me out and wanted me to log in using a Gmail account Google forced me to set up in order to shoot the Google Hangout video with Rachel last week. Very aggravating when your devices try to take over. Thanks to Paul, I think we've put them down for the time being.

For the first time ever, and we've attended 12 out of the last 13 years, all of us didn't get badges for all of the same days. While my sons and I got all four days and preview night, my wife only got Sunday. We were able to share badges and get her down on the floor every day, but it was not the same with just the three of us doing it.

Comic-Con never fails to both amaze and disappoint. Everything is either free or at or above MSRP if you're buying anything from one of the booths. There is always too much to do and decisions have to be made all the time between fun things to do and programs or panels that will educate you.

Something to keep in mind if you ever get to do a signing: look up and engage the reader/fan. I got my Beatles fix by buying the graphic novel someone made from their film Yellow Submarine, which I went back to the booth to get signed the next day. These guys just signed the book and passed it to the next person. No eye contact, no conversation, no "Thank you for buying my book", no recognition that I'm another human being. Bad form. I don't think I would ever go out of my way to buy another book from these writers/artists. The ones who engage you make you want to come back again and again. There are several artists who seem to genuinely remember my sons from past cons and ones who even remember me. Those are the type of people you want to continue to support.

While walking on the floor, recognized Ivan Salazar from photographs Chip Mosher has posted from time to time. Ivan was part of the PR push for Powers Squared Issues 3-5, so we stopped by to say thank you and introduce ourselves. Turns out he was talking with Pamela Mullin Horvath who was handling the heavy PR lifting and who's 4th of July vacation I sort of interrupted, so we got to thank her in person as well. I would have taken David Sedaris's advice, that I heard during one of his shows, to write a letter to everyone involved but some of these companies do all they can to mask a physical address on the internet so the next best thing, at least I hope so, is to thank them in person.

Favorite things heard in passing on the floor "There are only comics down that way..." "Aquaman is not that great..." and a teenage boy talking to another teenage boy, "When I grow up I want to get one costume..."

Oh, and for anyone tracking miles, per my Fitbit, I walked 6.06 miles on Wednesday, 6.18 miles on Thursday, 9.92 miles on Friday, 5.98 miles on Saturday and 6.4 miles on Sunday, most steps taken at what I like to think is a chain gang shuffle through the floor at the San Diego Convention Center.

Now to the panels and the free advice I'm passing on.

On the first night of the show, attended Comics PR and Marketing 101, led for apparently the 9th or 10th year by Chip Mosher from comiXology. I think I've been to the last four or so. Every year there are different panelists and different advice. This year all panelists were creators attached to the new ComiXology Originals initiative.

Got some good advice that I will pass on here:

1) Handle your social media professionally. Don't get political or use as a personal vendetta. Keep shit talk to a minimum. Stick to your work.

2) Look into local avenues for promotion: newspapers, etc., so we'll see if we can interest anyone from the Times or the Daily News in our story. It's things like that that will make my mother, an old-school PR person, happy to hear.

3) Don't expect people to find you. Even if you're good, you have to keep telling people what you've done.

5) Do PR for yourself as creator. You're your own brand.

6) Find out what makes your book different and market to that.

7) Pays to advertise. As an example, on Facebook. But remember not to spend what you can't afford.

8) Look for people who are writing about comic books and ask them if you can add them to your press list.

10) Their advice was to build a fanbase before going out on Kickstarter. (Contradictory advice will come in a later panel).

11) If you want to use Kickstarter, be active on Kickstarter before. Support other projects.

On Friday, I attended How to Create, Market, & Crowdfund Indy Comics. This was presented by Brian Pulido, who successfully funded I believe 17 Kickstarters for over $1.3 million. It may also help that Brian was a creator in comics for over two decades and has a bit of a built-in fanbase that others might not. However, his advice is worth listening to as well:

1) Study what Kickstarter has to offer in their "Creator Handbook." Learn the language of crowdfunding.

2) When people back your project, remember they arrive when they arrive. Be sure to welcome them no matter when they do. This may involve telling them your story from the beginning, but you have to be willing to do that.

4) Be completely authentic throughout. Be honest and aspirational.

5) You must have a video for a Kickstarter and it must be good.

6) You can use Kickstarter without an established fan base. Relate yourself as a content creator.

8) Take postage into account. Postage can kill you if you don't account for it. Take a prototype of everything to the Post Office and find out how much it will be to ship. Add postage to your price. Buy shipping supplies wholesale.

The main take away is that advice varies from panel to panel. Not sure if you have to have a fan base to start a successful Kickstarter, but I do know that we need to grow our base. To that end, I updated the website to include a Mailing List and would appreciate it, if interested, you could sign up on the site.

The final panel I attended, on Sunday, was How to Write Better Panel Descriptions led by Andy Schmidt from comicsexperience.com. With him on stage was another writer, Mike Costa, and artists Phillip Sevy and Reilly Brown.

1) Good news, it apparently doesn't matter if you write the descriptions or the dialogue first in your script. Schmidt and Costa do the opposite of each other and both have been published.

2) Panel descriptions are not really a description of what its supposed to look like, but more of what the writer wants the artist to do.

3) There should only be one action per panel. Tell the artist what the action is and move on.

4) Not every panel has action. Sometimes its more about emotional throughlines. Tell the artist what you emotionally want to accomplish in the panel. "Phillip is angry" was the example given.

5) Secondary action in the panel must be inconsequential.

6) Credited to Frank Miller: No more than five actions per page.

7) Use active voice. Describe the action as they happen. Use Present tense. Try to inspire your artist.

8) Okay to have silent panels.

9) Try to be terse in your descriptions. Get to the point.

10) Try to excite your artist.

11) Organize your panel descriptions with the most important information first and the rest in the order of importance.

12) Set up what's going on in the story. If a character is supposed to have a gun, show them having it prior to using it.

13) Establishing shots are the exceptions and may have longer descriptions.

Like all advice, some of it is common sense and you may already be doing it now. In some ways, that's the best kind of advice, do what you're doing as long as it is working.

Did have the revelation while we were there that Powers Squared does already have its own Cosplayers. Paul and Trevor are walking versions of Marty and Eli Powers. Posted this photo on Instagram as proof.


The more I post, the more I realize I don't know about social media. I didn't hashtag the photo as Powers Squared or SDCC 2018. I'm not used to thinking of such things and sometimes in the heat of the moment forget to do what others may find natural.

Even though we were gone, work continued on the comic book. Nina, our colorist, delivered her final pages in the Dropbox and Rachel, our artist, sent pencils for Pages 5 - 8. Haven't, as of this writing, had a chance to look at either. We did manage to send Nina a copy of the script for the next story arc.

Trophy Unlocked continues to post a Saturday morning review, even when we're not around. Attack of the 50 Foot Woman seemed the most appropriate considering where we were. Hope you had a chance to look at it.

Radio silence continues with my editor on Familiar Stranger and I didn't get too far past completing the rewrite on Paperback Detective. I think the latter still needs work, but I ran out of time before leaving.

This week, I'm hoping to get my land legs and get back to things. Only don't expect too much. Always good to set expectations low on post SDCC weeks.
Posted by lionsroar at 7:25 PM