I hope everyone is staying well and writing.

For me, much of the week has been spent on rewrites, both on Broken People, which I discussed last week, and on the Parents' Day script I'm working on for Powers Squared.

Let's start with Broken People. I got hip to the fact that the online grammar program catches much more than Microsoft Word, so I decided to use my mail program to run the first 50 pages, which I pasted into a draft and then made the changes there before pasting them back into the manuscript. That worked pretty well, except when I pasted it back all the margins were thrown off, so I had to go line by line for 50 pages making updates. Lesson learned. Next time, I'm going to have a second monitor and make the changes directly in the manuscript.

Other than that, I'm trying to run through the book for the nth time and I'm sad to say I'm not only finding the odd error but also I'm making some changes. It helps to read it out loud, though softly to myself. Sometimes the dialogue gets changed, sometimes it's a description. I'm going about 50 pages a day, which means it'll take a couple of weeks to get through it all.

As I mentioned last week, I moved two chapters around, and hopefully, I've made the edits that make that work. Sometimes it only takes a different word or a short passage to make it work, at least so I hope.

It should go without saying, no new queries this week and I have not heard back on the one that prompted me to start the rewrite. The clock is still ticking on that. If I hear back, I will, of course, let you know the yay or nay.

For Powers Squared, I finally made it through the first part of Parents' Day. Now, I'm still working on Part 2. I know what I want to happen it's just making it work in 20 pages and 6 panels per. I'm about halfway through it, so it'll take a while to finish. I also have to name the characters. I know that seems like writing 101, but I think there's a lot more to it than that. Still, I think it's secondary to the story itself and can be updated with find and replace later.

Don't know if you're listening to our podcast, On the Air with Powers Squared or not but this past week we revisited some questions we answered in 2018 as part of an Ask Me Anything feed. We also, thanks to Trevor, updated our Podcast Icon. It was Paul's idea, so credit where credit is due, but it was better than what I came up with on my own. 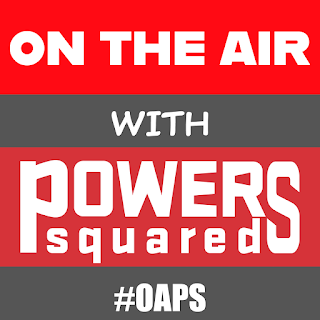 It was a busy week with the art, as our artist sent not only four pages for us to review but also five character designs we're having her do for future use, like a pitch packet and/or an ashcan. Relatively easy for us but still time-consuming.

On the Trophy Unlocked front, I finished the one for Nobody Lives Forever, and wrote two new ones for King Kong (1973) and Rain (1932). While it wasn't a factor in how they were selected, it is interesting that both take place on tropical islands. As always, no set time for them to appear but they will and I'll link them here when they do.

In the meantime, on Wednesday it was Trevor's review of Bombastic, a puzzle video game from 2002, and on Saturday morning it was Paul's review of An Extremely Goofy Movie, (2000) a direct-to-video animated comedy from Disney.

This coming week, there will no doubt be more rewrites on Broken People and I hope to complete my draft of Parents' Day.  Add to that, no doubt there'll be something to do with Powers Squared and the song goes on.

That's about all for now. Keep writing and I'll see you next week.

Posted by lionsroar at 7:26 PM