This was not a good week for me, due to things I don't want to get into here and now, but let's say things took the wind out of me. I even had to re-edit last week's post. When I can I will write about it but for now, we need to let it go.

On the flip-side, I've been trying to participate more on social media. Never know how effective that is, but I do want to point out the efforts of @PFDonato who on twitter has been trying to help those with smaller followings get exposure to others in the #writerscommunity with larger ones. I really do appreciate her efforts. I've also tried to be more active on Instagram for the sake of Powers Squared. I've heard, more than once, that you have to be careful not to spend too much time on social media so it's always a balancing act but since I wasn't writing for a couple of days, I thought it was something I could do.

Nothing much happened this week on Powers Squared. No new pages from Rachel or Nina until Sunday (which is fodder for next week). Trevor did send four new pages earlier in the week. We have a couple of voting opportunities out there this week, so if you want, you are more than welcomed to participate in them as well. First, we're working with Rachel on developing a mascot for San Romero Community College, the fictitious school Marty and Eli Powers attend. We have the basics of the mascot down but it's the school colors that we need to nail down. We'd like to have it be a community thing and if you're reading this, then you qualify, if you want to. Here are the choices: 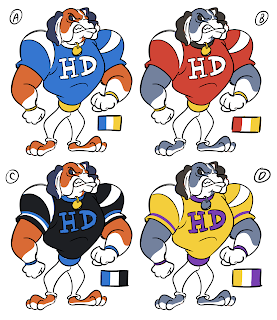 Please vote in the comments below or by emailing us at info@powerssquaredcomicbook.com.

The other is voting on social media. It's been our poll question for the past couple of weeks on our website. We're trying to figure out the best sites to concentrate our efforts on. If you follow Powers Squared, which we hope you do, please vote on the website, powerssquaredcomicbook.com. You'll have to scroll down the page but every vote counts.

Spent a fair amount of time this week on, of all things, the spine of our graphic novel. You never think about it but there is some work that goes into something that seems pretty simple. Mostly, it had to do with the orientation of the lettering and what should have to be on the spine as in the names of those involved. We settled on Hankins Hankins Hankins Murti, which sort of sounds like a family law firm with a branch in Indonesia, which is where Sika Murti lives. Sika was the artist on the first five issues and I will say Paul was insistent that his name appear; not that I was objecting or anything, but I want to give credit where credit is due.

Wrote a review this week for The African Queen, but published one for Once Upon a Time in Hollywood, the new and recently released film by Quentin Tarantino. We saw the movie on Friday afternoon and the review appeared as Trophy Unlocked's Saturday Morning Review the next day. This is a good example of the difference in writing reviews for films. When a movie is in the theater, like Once Upon a Time..., I try to write ones that don't give the plot away, while with older films, like The African Queen, the reviews are much more detailed.

Did a bit of writing this week, as mentioned above, but I did send out a query earlier in the week.
I have noticed a trend in querying that I know is more efficient for the agent. Two of the last four queries have been online through the same application, called Query Status Portal. At the end of the process, after filling out the form and uploading my pages, I've been given a URL to check to see the status of my query. If rejections could get any colder, having to look for yourself is about as impersonal as it can get. Which I guess is only slightly better than not hearing back at all. Now, that said, I did receive an email from the first person with this system, so maybe it won't be as cold and impersonal as I suspect.

Well, I'm hoping to get back into the swing of things, though I will have to be writing next week's post during the week, as I will be traveling back and forth next weekend to a family function in Northern California. Losing a weekend is tantamount to losing some of my most creative time, but there are things you do for love and loved ones.

So, until next week, keep writing.
Posted by lionsroar at 4:07 PM