Did more writing this week than normal and less on Powers Squared, though it still came up quite often. It is nearly a daily project in some form or another.

A couple of things I want to mention off the top. I did call the editor of Familiar Stranger at his place of work. Normally, I wouldn't have done that, but it has been about 15 months since he's had the book, which is ample time to have done something with it, even return it without comment. No surprise that I ended up leaving a voicemail. I did call rather late on a Friday, but I now have his number in my directory, so he should expect more calls if I don't hear from him soon.

I made the call on my way home and I was later than usual leaving work on a summer Friday afternoon. I attended a Lunch and Learn called Art of the Pitch Workshop, which I was lucky enough to get one of the seats. I can't go into anything that was really discussed and no I don't think because of the workshop I really nailed how to do one.

It was kind of brainstorming about an idea to pitch rather than how to present one. Everyone was supposed to submit an idea for a story, at least a starting point, from which Production Executives would choose four. We then broke into groups and brainstormed a story to go along with the idea. The session we had was rather interesting, though it was, again, more about coming up with a story than how to do the pitch. Our Production Executive, no names here, was very adept at telling a story and sort of lead us away from one that was more in the vein of Logan to one that was more about the power of imagination.

The woman who had submitted the idea was in our group, so we made her the presenter. All the other groups, though, had the entire group present the pitch. It was interesting to hear him tell her what to say and actually hearing her give the pitch. If you remember the old game of telephone, you can imagine how it changed from his polished idea to her more nervous presentation. Interestingly enough, she did a pretty good job of it, as we each won a bag of company merch.

The idea I submitted, which is the story I had hoped to pitch, and which should sound very familiar to anyone who has heard us or read the website: College-aged twins discover that they were granted superpowers when they were young. Of the 10 or 11 that were submitted anonymously, I took some pride in that it was one of the four that were selected to be expanded on for a pitch. The story that group came up with was far from the idea of Powers Squared and turned into a story of triplets, where one of them was evil. Ironically, if that's the right word, two of the powers they came up with were somewhat similar to the ones Marty and Eli do share. I still like our idea better.

The graphic novel Artithmeric had sent us arrived on Monday night. Paul and I made a little-watched unboxing video of the event. Artithmeric simply put the first five issues into a hardbound book, but I believe we all really liked the concept. We've discussed how we could edit it to make it into one continuous story. I showed the book off to some people at work, whose opinions I respect, and it was pretty well received. It's always good to get positive feedback. We think the graphic novel would make a great Kickstarter tier reward.

On Tuesday, I spent some time listening to another seminar on creating a good landing page for your comic book. It did get me to thinking and I made some revisions to the page, adding in testimonials from the internet, of which we have a few. If you have read any or all of the issues, any comments on our Facebook page or other social media would be appreciated and they just might find themselves on the page.

I made some edits and posted the link on the private group site for the seminars. No comments, which I don't think it means I nailed it, but rather no one has bothered, even the moderator, to give advice. On Saturday morning, I made some more changes, even creating a single .jpg for the page rather than trying to manage several separate ones. Me and photoshop.

Friday, Rachel sent us the first four pages pencils of Issue #12, which Paul and I reviewed that night. The work is her usual very good and we were both happy with how things are looking. The story gets better and her art holds up very well. This was not always the case, as our first artist got inconsistent over time. 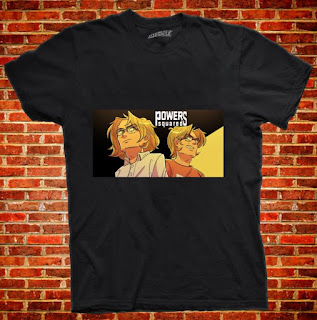 Also on Friday received a new t-shirt from our shop, which will go live today. Since we redid our banner image on social media, I thought it was time for a t-shirt to go along with it. Purchased one as a sort of test for myself. I was wearing it in this week's A Week in Powers Squared video. Since the latest unboxing video went pretty much unwatched, decided not to do one for this unboxing.

On Wednesday night, received our first sticker from Stickermule, another test run for a possible Kickstarter tier reward. Sent one to our only known Super Fan, which we hope she'll appreciate. She actually suggested stickers, so we wanted her to have one first, or close to first.

Wednesday, Thursday and Friday, I did make progress on my new edits of The Runaway. Earlier in the week, I thought I was trapped in a sort of endless loop conversation in the book. I don't know if you've had the same experience, but I sometimes find the book to get away from me and take on a life of its own. I want to say this and this, but the characters want to say this and that. I managed, I think, to write through it, but it does happen from time to time.

No new reviews from me for Trophy Unlocked, though I did start one for What We Do in the Shadows since we watched the film on Friday night. This week's Saturday Morning Review was Paul's review of A Bug's Life. We realized that there are many Pixar films we had not reviewed, so this is a little bit of catch up. Fun fact, this was the first film the boys ever saw in a movie theater.
Posted by lionsroar at 5:38 PM