Well, the holidays are practically upon us and as I suspected prep has taken its toll on output.

For the most part, I'm rethinking The Runaway. I got to the point where I'm not sure where to go next. My premise needs more attention that I can give it at the moment. I need to figure out how my PI can find someone with little or no information provided by his client. It will take some thinking and perhaps research so it moved to back burner for now.

This week in Powers Squared has been fairly active as everyone involved gets ready for Christmas and family. Our colorist, Nina, has notified us that she won't be able to finish the next four pages until after the New Year. That should be fine since there won't be more than four pages and a cover for her to do in January, so I don't anticipate us getting behind schedule.

Rachel sent us the final pages for Issue #9 and the cover both based on a little feedback we gave her. I really like how the last panel got worked out.

We finished a rather last minute rewrite on the script for the next story arc, Issues 10-12, currently called What's In a Name? It started with my taking a final look which led to some rewrites and then more edits from Trevor and Paul. Some of the changes were grammatical (apparently I don't know a question when I write one) and word choice. We had pretty much worked it all out prior but this is the 12th and hopefully last rewrite.

Rachel has, in the past, made some artistic changes but we're also curious about how she likes the story since we're all going to be living with it for most of the coming year. She seemed anxious to get to work on it but I'm not expecting anything from her until after the holidays.

Still trying to Direct Message Powers Squared followers to also follow us on other social media sites. Once again, I did five and then Twitter won't let me do any more than that at one sitting. Not sure what's up with that but it does make sure I'm not spending too much time on social media. So far, the results haven't been overwhelming, no new followers on Tumblr or YouTube, as a result, this week. I know its supposed to be an uphill march but I never realized it would be this slow.

Our poll question, "Who is your favorite supporting character in Powers Squared?" has gotten our usual one vote so far. Somehow the saying, if you can reach just one person, seems a little hollow when you only ever reach is one. If I knew who the person is who responds to the poll question every week I'd point them out for praise. Again, thank you for paying attention. 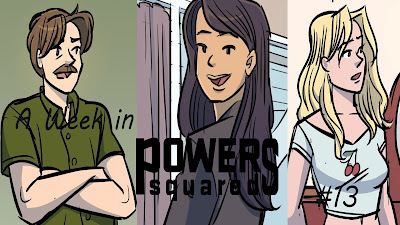 New video up on YouTube, A Week in Powers Squared #13. You can watch it here. Paul and I discuss the origins of the characters: Uncle Brian, Mocha, and Jennifer Perry.

As far as Trophy Unlocked goes, we've completed our annual look at Christmas films with the comedy The Santa Clause. But wait that's not all, Paul reviewed Once Upon a Deadpool, which is a PG-13 version of the R-rated hit Deadpool 2, which came out much earlier this year. A bit of a box office grab for Fox/Disney, but really worth the trouble if you managed to see a screening during its limited run. I'm sure it will see the light of day on home video next year if you missed it.

I did finish two more reviews, one for next week, What Price Hollywood? and one for next Christmas, Cover Up, so you're going to have to wait for that one for about a year. With the year coming to a close, please look out for our annual lists of Highlights from the past year, with each of the reviewers weighing in with their own lists. Those should be out early next week which means you'll have to wait a few days for those.

So until next week, hope everyone has a Merry Christmas!
Posted by lionsroar at 10:49 PM