The big news for Powers Squared this week is the new banner and channel description we've put up on the YouTube website. The image was done by Rachel Wells. Paul wrote most of the description, which was better than the one I came up with, something along the lines of  "A weekly exercise in futility as two men try in vain to grow their social media in a series of unviewed vlogs." 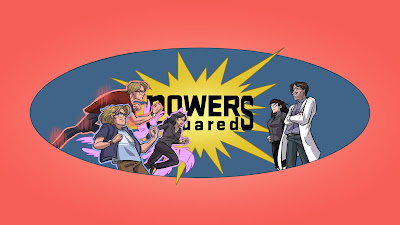 Seriously, we would appreciate it that if you read this blog you'll also take a look at our latest video and would like it even more if you could subscribe and ring the bell so you can receive  notifications when new videos are available. They're the usual rubbish and no longer than a few minutes, so it won't take long to show your support.

Seeing as this is the end of the month, we've received eight pages from Rachel, bringing us up to page 16 and four more pages from Nina, bringing that part up to page 8. Trevor also lettered three pages, so it seems to be firing on all cylinders.

This is the week that both Powers Squared and Trophy Unlocked made their first appearances on Pinterest. While I've had an account for awhile, I had never really done anything with it, other than collect pins on a private board. I decided that maybe it would be another way to publicize both. Pinterest brings up to six the number of social media accounts we now have for Powers Squared. For Powers Squared, I'm trying to upload images from the comic book pointing back to the website. I started with the main characters and will hopefully be adding more as the days go on.

Speaking of Trophy Unlocked, we had a bit of milestone this week as Trevor's review of
Starlink: Battle for Atlas for the Nintendo Switch makes the 900th one on the blog Paul started 8 years ago.

We also got the Christmas Holiday reviews started with Trevor's review of the animated The Tailor of Gloucester (1993), an adaptation of a Beatrix Potter story. Recently, Trevor has really gotten into Potter's artwork and this seemed like a natural for him to review and to kick off the season.

On that subject, I came across a Christmas review that I had done but had not published, Laurel and Hardy's Babes in Toyland (1934), aka March of the Wooden Soldiers. That will most likely appear before we wrap up our annual salute to Holiday films.

I also published my review of A Star is Born (2018), just on the tail end of its theatrical run. We don't see all movies when they first come out so it's no slam on the film that it took so long to get a review written. Publishing it became tricky with the milestone, so it had to be fitted in before it got to be too old. Oh, the joys of blogging.

In other writing, I finally finished my rewrites on Broken People, though there may be some tweaking to come. It sort of felt a little anti-climatic to finish it. While rewrites are a bit of a beast, I get nostalgic for the process as I'm finishing it. This one, as I've discussed, was more than just rewriting but also blending two stories into one. I sort of changed the ending, as I took the better of the two previous ones with a bit of a twist. Right now, its 94,281 words and 519 pages.

And just when you think you're done hearing about it, I do have news on the editor and Familiar Stranger. It seems he had a birthday recently, which means he's still alive, so one question answered. In my greeting, I slid in something like "Hope to hear from you soon" to which he replied that I would be soon. Now soon isn't exactly a definitive time but this was the first acknowledgement from him in months, so who knows, something might actually come of it. I guess the keyword here is "Might" but at least there's hope. And what a better way to start out the holidays.
Posted by lionsroar at 8:41 PM