Looking back this was a pretty good week all the way around when it comes to writing. Daylight Savings Time only weirded me out a little, as I only had one sleepless night. I was pretty much tired all week but I managed to work through it.

A lot seemed to be happening with Powers Squared this week. Not only did we hear routinely from the artists involved but we also made some headway on putting together some ideas for promotion. First, on Thursday, we had a lunch to discuss ideas with me, the boys and a guy from work who is involved with social media and had some ideas about what we should be doing.

We discussed the usual ideas, videos on YouTube, Twitter, Facebook and Instagram, all things that have been mentioned here before. We're, of course, still in the planning stages but we're starting to put together a plan. The idea at present is to do one long interview and then divide it into shorter videos. That's the plan, at least for now. We've even lined up an interviewer for when we're ready to proceed.

We've also made some updates to Powers Squared Comic Book.com, including adding drop-down menus and organizing the issues and characters together. We've added biographies for the current creative team and added some preview pages as well. For some reason, I'm having problems uploading jpegs for a couple of issues. I'm not sure why, but after about twenty to thirty minutes of trying, I put it away for now. So only Issues 1 - 3 have previews at present.

Below are some preview pages we've uploaded. For the few of you who have already purchased the books, two of these will seem familiar. These are the first pages of the first three issues. 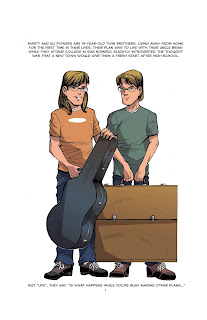 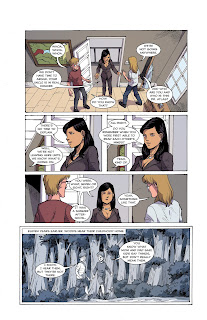 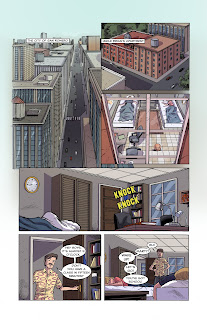 Also on Thursday, we finally had the oft-discussed and oft-delayed talk with our connection at Comixology. Now the plan is to have them process our submission and then hold it until we can put together some promotion. Even he's going to publicize the issues on their website and then possibly some other stories about the twins angle, i.e. twins doing a comic book about twins. No promises, but we'll see what, if anything, comes of it.

No new reviews were written, at least by me, this week. I had originally planned to post a review of Lady Bird on Trophy Unlocked, but instead, on Saturday morning, we published a review of Yu-Gi-Oh! The Movie (Remastered) which Paul and Trevor attended this past week. Got to keep things fresh. 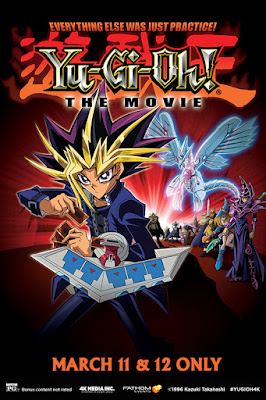 On the Familiar Stranger front, I managed to finish the rewrite I've been working on like forever. At present, it's 86,303 words and 467 pages long. Now comes the print it out, read and edit portion of our show. I'm going to start that process this next week. Not sure how fast that will go, but I must admit I'm a little happy to get to this stage.

Well, that about summarizes this past week. In the coming week, we've got WonderCon on Saturday so there will be some prep and ready for that. Look for another Report from the Front next time.
Posted by lionsroar at 8:43 PM