Testing out a new logo for the blog. Let me know if you like it or not. I thought after over three years, it was time to liven up the proceedings a little.

Not necessarily a week with a lot of output, though, as always progress has been made. I've been really tired all week for some reason, lack of sleep, so that does affect my writing, wakefulness being required to do things like think and push down keys on the laptop. As always, I'm full of excuses for not doing as much as I wish I could.

Let's start with a little sad news. I found out last week that while Powers Squared had made it to the Semi-finals of a short story to screen contest I entered last year, we did not make the quarterfinals. That's not too bad for a comic book, I guess. Still hurts.

The week was sort of dominated by Powers Squared as a matter of fact. We got a lot of pencils and inks from our artist. While we're not officially done with them, we're up to page 16 with the art and pretty close to page 8 with colors. So, pretty fast as compared to our first five issues, which took two years to get done.

Updated some of the images on powerssquaredcomicbook.com to show the changes from the first five issues and issue six, Kirby: Good and Evil. Here are some examples of the new Marty, Eli, Kirby, and Don: 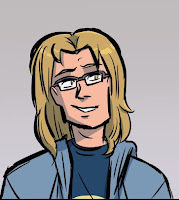 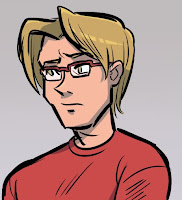 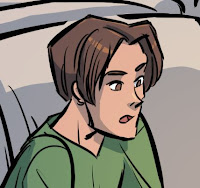 More will be added as pages are colored. Check the website for write-ups about all issues and characters.

We also finally heard back from our contact at comiXology. If you've been reading this blog regularly (thank you), you're probably aware that we've been trying for over a month to get a response from him. Persistence finally paid off late Friday afternoon, when after weekly pinging we got a reply. (Point of interest if you find yourself in a similar situation with a publisher, you might want to be showing them something new rather than just begging for a response.) Luckily with this issue coming together as quickly as it has, having new things to show has been fairly easy to put together. Now, did we get the meeting we've been asking for since Comic-Con? That's still to be seen but you have to take it one step at a time. First, they have to acknowledge you before they'll meet with you. Check back here for updates.

Spent Monday and Tuesday nights working on and posting a review for Trophy Unlocked for Runaway Brain, our last short film for February, which was published on Saturday Morning. Runaway Brain is a little known Disney animated short featuring Mickey Mouse. No new review from Friday night movie night, we rewatched The Graduate (1967), but our first review for March is already ready to go, so no worries.

Alright, finally down to Familiar Stranger, the oft-mentioned mystery novel I've been rewriting for the past several months. For whatever reason, this always seems to get short shrift. Well, the needle didn't move all that much this week: 73643 words and 401 pages for those keeping track.

So, that about wraps it for this week. Hopefully, more progress gets made and I'll let you know what did or didn't get done.
Posted by lionsroar at 9:27 PM