Does 300 weekly blog posts feel like a milestone? Sort of. That means I'm on the downside of six years of sitting down once a week to consider what I'm doing in an effort to keep myself honest. I'll probably go through this again in three months, when I hit six years, but in case you don't read that one, this blog started because I don't have a "crew", that is an editor, alpha and beta readers, etc. that you're supposed to have to keep you on task, i.e., writing.

I figured blogging about it would be my way of keeping myself motivated. I'd like to imagine there is someone who reads this that would wonder why I didn't blog one week. Wonder if something had happened? Why did he stop? So I continue this little exercise in self-examination. What did I do this week towards my goal of writing?

Well, let's start with The Runaway. I finished the draft I was working on but rather than go immediately onto the joys of querying (more on that later), I decided to go through the book and look for story incongruities and places where I could flesh it out. The book is a little over 80,000 words and I'd like to see if I can make it a little longer. I'm not trying to flesh it out for the sake of fleshing it out, but rather trying to make sure I'm capturing what I should be. Something my main character sees or smells or thinks that would help the story.

I know I write a lot about this book and never get into what the story is about. My main character is named J.D. Barrister. A Texas transplant, he works as a Private Detective in Los Angeles. He lives and works out of his apartment in Palms. The story opens with J.D. finding a Midwest girl who has run away from home and is not stripping, though she's underage. After returning her home, J.D. is hired to find a different runaway, this time an adult man, John Douglas, who has supposedly disappeared and is hiding out in Barstow. The woman who hires him claims to be the man's wife and pays J.D. $800 to bring him home. J.D. gets delayed when his ex-fiancee, Debbie Estevez, an LAPD homicide detective, goes into labor and he has to take her to the hospital. But that delay saves J.D.'s life and he spends the rest of the book trying to figure out why John Douglas ran and who wanted J.D. killed. I'll work on the synopsis before I start querying the book.

Speaking of querying, my son Paul is taking his last UCLA Extension course on writing the novel and one of the things they'll cover before the session is over is query letters. Rather than flail around on mine, I thought I'd wait to see what I can learn from what he learns before I start sending out my pre-rejection emails for Broken People. (That doesn't sound very hopeful, does it?)

I managed to complete a new future review for Trophy Unlocked, Smart Money (1931). The blog is still in the midst of Scooby-Doo month with Paul's review of the live-action Scooby-Doo published as the Saturday Morning Review and Trevor's review of Donut County coming out on Wednesday, which for the past few weeks as been all videogame reviews. I'm hoping to get off the bench in June.

We received a review of Powers Squared Issue #9 this week from First Comics News. It could have been better, a 3 out of 5, though he did compliment the writing and the art. It's a little frustrating that it came out after the book was published, even though we had told them the date prior, and that the reviewer constantly misspells the main characters' last name. It's Powers not Power. You can read it here and find all the reviews of Powers Squared here.

I also designed a new banner for our PodBean podcast, On The Air With Powers Squared as well as a t-shirt for the show. The banner looks like this: 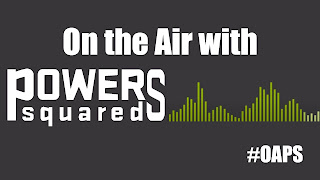 You can listen to it on various sites, which you can find at https://powerssquaredcomicbook.com/join

Well, that will about do it for now. Keep writing and I'll see you next week.
Posted by lionsroar at 6:16 PM