Well, the week started out fairly normal and I'd have to say quiet. I was trying to get back into the swing of things. I was making some final edits to a script of a future Powers Squared issue and posting some images from the comic book on Instagram, you know like you're supposed to.

On Tuesday, saw a tweet from AMAfeed for an article they published on boredpanda.com titled 11 Non-DC/ Marvel Comics You Should Read Before This Year Ends (Part 1). The cool thing and the reason I received the tweet was that Powers Squared was mentioned as #4. I was pretty excited and sent the link to Paul, Trevor and my wife. 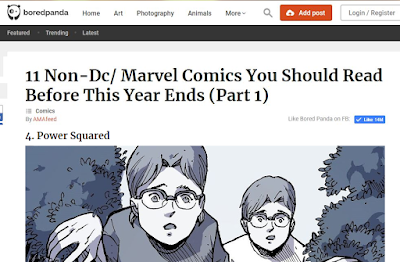 While all of the other comic books had images of their covers, our mention had the same out of focus one of me from our AMAfeed last July. I would have picked a better image if I wasn't in a hurry (I was painting a bathroom at the time) and had known I couldn't ever change it. But there it was a few weeks later staring back at me from the article. Not a good showing.

Paul noticed that the brief write up also listed Marty and Eli Powers as the creators of their own comic book. Strange, I didn't remember them being there at the time. I wasn't miffed that I was omitted, even though I had lead the AMAfeed earlier in the month, but it didn't look good to have fictional characters listed as the creators.

After a couple of messages with AMAfeed through twitter, to their credit, they picked another image from our website and corrected the creators to be Paul and Trevor. Two out of three ain't bad, as they say and it wasn't worth going back a third time. At least now we have a better listing as you can see above.

I mention the incident not only to point out a bit of recognition but also to point out that under the right circumstances you can get "bad" press turned around. Now, if only the article said where you could buy the comic book.

On Friday, Paul and I had a delightful Google Hangout with Nina Gaillard our colorist, which was also posted on our You Tube channel. We also picked up our first subscriber, so that was nice.


Watched and wrote a review for She Had to Say Yes (1933), a Pre-Code drama directed by Busby Berkeley and George Amy and starring Loretta Young, which was published as Trophy Unlocked's Saturday Morning Review. Need to work on one for Game Night, a recent film that I only recently watched from a Digital download.

Still in a bit of a holding pattern with J.D. Barrister stories. Still no word from my editor on Familiar Stranger and I haven't had the will to re-edit the ending of Paperback Detective, yet. I made some brief notes for another story but I really think I should re-edit another of the "unfinished" books before I venture into uncharted territory.

I'll make the decision this week and let you know here as usual.
Posted by lionsroar at 8:33 PM